Can Christians Lose Their Salvation?

I don’t like to use the phrase, “once saved, always saved”, even though I basically believe the idea behind it. I don’t say it because the Bible never says it like that. Instead, I prefer expressing this truth as the reformers did: they used a more biblical way of saying it: “the perseverance of the Saints.” In other words, it is as Jesus said, “…the one who endures to the end will be saved.” If you are a true Christian, you are in Jesus’s grip (John 10:28) and you will persevere in the faith. However, if you are not a Christian, even though you might show some signs of being one now, you will not in the end continue following Christ.

This is not just a matter of semantics. It is really, really important. Here’s why: again and 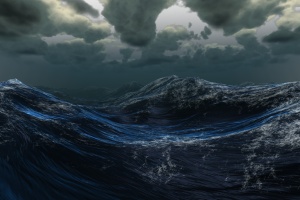 again, I meet people who are assured of their loved one’s salvation because he or she prayed a “sincere” prayer to receive Christ in years past. Often it’s a mom or dad who has been taught “once saved, always saved”, and they take comfort that though their child has no interest in Christ, no desire to talk about spiritual things and no desire to come to church, in spite of all that, he or she prayed a prayer a long time ago, and so they must still be saved.

Well, it’s possible, of course – the Bible tells us that sometimes true Christians fall into significant patterns of sin, what is popularly called backsliding, but generally (and biblically), if there is no fruit, there is no salvation (Matthew 12:33).

So how does perseverance of the saints work, and why does a true Christian always remain a Christian? In other words, how are we to understand this truth? Well, there is a fascinating story in Acts 27 that demonstrates the believer’s security, and it has to do with what happened when the prisoner Paul and his ship came into a terrible storm on the sea. In the midst of the raging sea, Paul stood up and said (shouted, I’m sure!) this…

“Men, you should have listened to me and not have set sail from Crete and incurred this injury and loss. Yet now I urge you to take heart, for there will be no loss of life among you, but only of the ship. For this very night there stood before me an angel of the God to whom I belong and whom I worship, and he said, ‘Do not be afraid, Paul; you must stand before Caesar. And behold, God has granted you all those who sail with you.’ So take heart, men, for I have faith in God that it will be exactly as I have been told. Acts 27:21-25 (ESV)

Do you see this promise? God told Paul that he was going to make it and nobody was going to die.  They were all given “assurance of their salvation”.

And yet, some time passed, and the storm continued. And then, as they neared land, some sailors thought to try to escape on their own in the life raft…

And as the sailors were seeking to escape from the ship, and had lowered the ship’s boat into the sea under pretense of laying out anchors from the bow, Paul said to the centurion and the soldiers, “Unless these men stay in the ship, you cannot be saved.” Then the soldiers cut away the ropes of the ship’s boat and let it go. Acts 27:30-32 (ESV)

Do you see what Paul says? He warns the soldiers who were holding him captive that if the sailors escaped, it would kill them all. But consider…that doesn’t make any sense in light of the earlier promise – why didn’t Paul put his feet up and think, “Well, it doesn’t matter if the sailors escape, God promised me that I would make it alive with everyone else.”

Ah, yes, God did promise that, but how was the Lord going to fulfill His promise?  Answer: through Paul’s words of warning keeping the storm-tossed ship afloat.

In the same way, if you are a true Christian, your salvation is absolutely guaranteed. God will keep you safe, but He uses certain “means” to do that. We will arrive at the safe shores of heaven only through many storms, and through it all, God keeps us safe as we listen regularly and closely to His words of warning in the Scriptures, and He keeps us safe as we faithfully go to church where we are reminded of the glorious gospel.  Moreover, He keeps us safe as we spend time in fellowship with other Christians knowing that we need their encouragement so our hearts are not hardened.  This is not a doctrine of works – it is that we must have faith in Christ today.  And “faith comes by hearing and hearing by the word of Christ.” (Romans 10:17)

One of my seminary professors, Dr. Wayne Grudem, said that the key question to ask someone was not, “When did you pray to receive Christ?”, perhaps looking back five, 10 or however many years ago, but “Are you trusting Him today? Are you counting on Him and Him alone…today?” If you answer yes, it is a sign that you are a true believer.  And a mark of a true Christian is that he builds himself up in the faith – warning himself and others when “the sailors are escaping.”

In other words, we are assured of our salvation, but this does not mean it is time to put our feet up and live however we want.  Such behavior is actually testimony to no spiritual life at all.  He who endures to the end will be saved.

Posted by Roger Knowlton on March 18, 2015 in Uncategorized

Tags: Acts 27, Apostasy, Losing Your Salvation, Making shipwreck of Your Faith, Once Saved Always Saved, Perseverance of the Saints

One response to “Can Christians Lose Their Salvation?”