Should Women Wear Head-Coverings in Church? 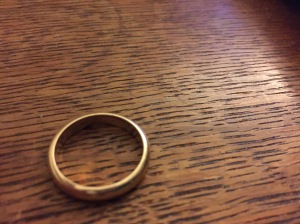 Yeah, I know – the picture gave it away – that’s right, it’s the inscription inside my wedding ring, and in order to take a picture and give you the exact details, I had to take it off, which is something I almost never do. You see, I have heard horror stories involving kitchen drains and gym bags, and I frankly don’t want to take the risk. And risk it would be, for I am married to a wonderful woman who also happens to be fairly sentimental. She would not cotton very well to me losing the ring which she slipped on my finger at the altar. So I wear it all the time, and I think that’s good.

Mind you, she wears hers all the time too. And I’m glad for that, not only because I’m also a little sentimental, but because I like everyone to know that she’s mine…and the wedding ring is symbolic of that.

We all know that, right? Of course we do, because that’s what wedding rings mean in our culture. I admit that when I was a single man, while I wasn’t obsessed with the practice, I looked at ring fingers a time or two, and an empty ring finger meant…possibilities. A ring on a ring finger? Well, that meant look for other ring fingers.

So along these lines, most of us don’t think so highly of the husband or wife who takes off a wedding ring to go out on the town with friends from work. We know what they’re thinking, and it’s not honoring to their spouse…or in keeping with their vows.

Wedding rings mean something in our culture, but if another 2,000 years were to pass before Jesus returned, well, there might be no such thing as a wedding ring anymore. Who knows what would symbolize marriage in another 2 millennia? Time changes many things, including symbols. Why, it’s even possible that in another 2,000 years, women will revert to the New Testament practice…of wearing head coverings to show they are married and under the authority of their husband, like Paul seems to indicate in 1 Corinthians 11.

So, the question at hand is, “Should a woman wear a head-covering in church?” And in his excellent book, Evangelical Feminism and Biblical Truth, Wayne Grudem argues no…

“No matter what people think about requiring head coverings for women today, all interpreters agree that head covering was a symbol for something else, and that Paul was concerned about it because of what that symbol meant. People have thought that head covering for women in the first century was a symbol of (a) a woman being in submission to her husband (or perhaps to the elders of the church), (b) being a woman rather than a man, (c) being a wife rather than an unmarried woman, or (d) having authority to pray and prophesy publicly in the church. There may be other explanations of the symbolism, but everyone agrees that Paul’s concern is not to protect women from catching a cold or getting a sunburn on their head. Rather, he is concerned because of what wearing a head covering symbolized to people in Corinth.

“So we should ask whether wearing a head covering symbolizes any of these things today. At least in twenty-first-century America, it symbolizes none of these things!…Therefore if we cannot be sure what the head coverings symbolized for women in the first century (for interpreters differ on this), the very fact that it does not symbolize much of anything to people today, even to Christians, is a strong argument that Paul would not have wanted us to follow it as sort of a meaningless symbol. I think it also means that God Himself does not intend us to follow this practice today, in a society and culture where it carries no symbolic meaning.”

All that said, I have great respect for my sisters in Christ who wear head coverings today, especially because these women do so out of a high value of obedience to the Word of God, at least as they understand it.

But my sweet wife won’t be wearing a head covering any time soon. However, by the grace of God, both of us are planning to keep our wedding rings on, as they say, “till death us do part.”

Posted by Roger Knowlton on May 19, 2015 in Uncategorized