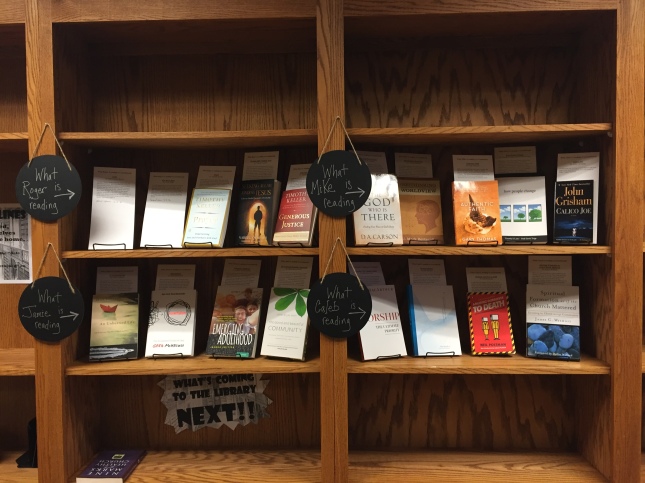 We’re redoing our church library and the pastoral staff was asked to compile a list of books we’re reading to make a nice section of recommendations for the church. Here’s what I came up with…

I read this for a Sunday school class back in my college days and recently started it over. It’s a classic for a reason, as Packer, an Anglican, provides a glorious overview of the Christian faith. The back cover is full of recommendations from a who’s who of 20th century Christianity. If you’ve never been exposed to this gem, don’t wait any longer.

I “read” (listened to) this on our recent 6,100 mile road trip. Rath, the bestselling author of Strengthfinders 2.0, packs his book full of research based facts to motivate you to eat better, exercise more, and sleep well. It’s amazing how your quality of life improves as you put all three together. Each of the 30 chapters has a tip based on research regarding each of the three areas to help you be the best you can be.

The Road by Cormac McCarthy

This Pulitzer-prize-winning book tells the tale of a father and son traveling south together in a post-apocalyptic world. So far, it is a lesson in loving a child, and McCarthy’s writing deserves the praise it receives.

Diane and I listened to this testimonial whenever Annie was otherwise engaged on our big trip. It’s one of those books that manages to be informative and delightful all at once. Qureshi was raised in the west but in a devout Muslim family. The book takes a nice tone as he honors his parents and his childhood faith, giving us all reason to pause and wonder whether we are taking Christianity as seriously as his parents took Islam. If you want to understand what it means to leave the life of a Muslim to embrace Christ, start here.

Do you see a pattern? Yes, I’m thinking about health (which doesn’t necessarily mean I’m doing anything about it!) This book tells the story of how Americans have gained on average (I forget the statistic exactly) 25 lbs. over the last few decades. How? Two words: processed foods. If you are looking for motivation to put down the Cheetos and turn away from the lunchables, pop-tarts, and cold cuts, pick this one up.

Another “listen” on the road trip, but this one we played for all of us. And we loved it! It’s a novel for everyone, telling four different stories of four children and the various injustices they encounter and seek to overcome in life…and the music that helps them through. The author ties the stories together beautifully at the end. I had a serious lump in my throat. Read this one (or listen to it – a lovely musical score goes along with the audio version) with the whole family.

What is an Evangelical? by D. Martyn Lloyd-Jones

Along with Seeking Allah…, I read this book in light of the recent controversy at Wheaton College (where Josh and Elisabeth attend). It was at this august Evangelical institution that a Political Science Professor said in December 2015 that Muslims and Christians worship the same God. They don’t…but that question has never received more attention than it did in the last few months. This is a short read, and Lloyd-Jones defines an evangelical in three chapters, recognizing that true Christianity exists outside of evangelicalism, but wisely pointing out that if you reject evangelicalism, you may be going to heaven, but you probably won’t take anyone with you. After all, the “Son of Man came to seek and to save the lost.” (Luke 19:10) In Lloyd-Jones’ words, apart from an evangelical faith, Christianity loses its “converting influence.” I doubt he would consider the (now former) Wheaton professor to fill the bill.

Redeemer church in Manhattan, pastored by Keller, is known not only as a church that proclaims the gospel, but as a fellowship that is “for the city”, caring for the “least of these”. Keller lays out the strong biblical case to be a people who live for the poor and needy and spread “shalom” wherever we go.

The Boys in the Boat by Daniel James Brown

The sport of crew (a.k.a. rowing) takes center stage in this engrossing true tale of 9 college kids going for gold against Hitler’s best in the 1936 Berlin Olympics. I’m a sucker for a World War 2 story, and though this isn’t quite that, it’s close, and I delighted in the story. I’m not the only one. Though it was only published in 2013, it is one of the all time top twenty best-selling non-fiction books at Amazon.

Those who know me well are not surprised to find two Keller books on this list. He’s a modern day C.S. Lewis, and if my layman predictions are right, he will still be read 100 years from now. If you want to give your prayer life a shot in the arm, apparently Timothy Keller practices what he preaches, and he is an faithful guide. His spirit throughout is humble and yet informative.

Posted by Roger Knowlton on March 8, 2016 in Uncategorized

The Trouble When CHRISTIANS Say There Are Many Ways to God

Most non-Christians consider it the height of arrogance when Christians claim that Jesus is the only way to heaven. Granted, on the surface I suppose it does seem awfully exclusive and even uncharitable to say that Jesus is the way and the only way to God. However, when people who consider themselves Christians affirm and accept other religions, I have a heart to show them that they are actually doing great damage and nullifying their own faith. Here’s why:

All other religions outside of Christianity have one thing in common – they are based partially or completely on works-righteousness, that is doing certain things or keeping some form of a law to attain whatever is their view of salvation. Only Christianity presents salvation totally by the grace of God: “For by grace you have been saved through faith. And this is not your own doing; it is the gift of God, not a result of works, so that no one may boast.” Ephesians 2:8-9 (ESV)

* Buddhists have the eight-fold path, and three paths among the eight are (according to Wikipedia) acting in a non-harmful way, speaking in a truthful and non-hurtful way, and making an effort to improve.

* Hindus are quite diverse, but according to at least one site I found, their way includes acts of devotion or worship, discrimination between truth and untruth, and the one most of us are familiar with – karma, that is doing things that cause the well-being of others, recognizing that our actions will come back to us.

* Muslims teach both the grace of Allah and works, for instance, in Surah 5:9… “Allah has promised those who believe and do righteous deeds [that] for them there is forgiveness and great reward.”  Muslims, therefore, like all other adherents to non-Christian religions, do not know whether they will attain paradise. There is always an element of doubt based on whether they have kept their form of the law.

So…here’s the problem: if other religions are saying that salvation is attainable only if some law is kept, and a “Christian” says that these are equal and valid methods of attaining salvation (provided one is “sincere”), that person is actually saying that Christ’s sacrifice was purposeless. At least that’s what Paul said in Galatians 2:21:

I do not nullify the grace of God, for if righteousness were through the law, then Christ died for no purpose. (ESV)

This makes sense – if I can achieve salvation through the 8 fold path or praying 5 times a day or paying attention to karma – then, perish the thought, Christ’s work was foolish and useless, a sacrifice…for nothing. Why did He die if I could be reconciled to God some other way? Therefore, we can understand when non-believers denigrate Jesus’s claim to be the only way to God, but when someone who claims to be a Christian does so, I am forced to question whether they even understand the true meaning of the faith they claim to espouse.

For, in one sense, the thinking that all religions are equal and valid makes perfect sense if they are all really some form of the Golden Rule. But they are not. Christianity alone says that we are saved by God’s grace which comes to us through trusting in Christ’s death in our place at Calvary.

And therefore, every person who says that all religions are equal and valid is nullifying the grace of God…and blaspheming what Christ did as a purposeless waste.

Posted by Roger Knowlton on June 16, 2015 in Uncategorized