I knew that grace was showcased in Les Miserables, the latest blockbuster released on Christmas day, but I 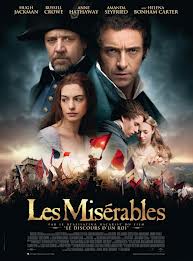 didn’t know just how much.  We went with a large cohort to see a matinee yesterday afternoon.

The movie is based on the musical which began its run on Broadway in 1987 and ran until 2003, the fourth longest running Broadway play of all time.  Victor Hugo wrote the novel in 1862 on which the play itself was based, and it is considered one of the greatest novels of the 19th century.

Diane and I spent a memorable night in Chicago seeing Les Mis, probably 15 years ago.  It was only memorable because our seats were so awful, the very definition of nosebleed.  We also went in unfamiliar with the songs and storyline (not recommended for musicals), and found ourselves scratching our heads most of the expensive night.

Anyway, Les Mis is the story of Jean Valjean, a man sentenced to 19 years hard labor for stealing a loaf of bread to feed starving relatives.  Every preacher worth his salt has told the story of an early scene from the tale, where Valjean, upon his release, finds shelter in the home of a bishop and returns the favor by stealing silver from the kind and godly man.  He is caught by the gendarmes, and brought to the bishop, whereupon, the man shocks the police and Valjean, by saying (from the novel):

“Ah! here you are!” he exclaimed, looking at Jean Valjean. “I am glad to see you. Well, but how is this? I gave you the candlesticks too, which are of silver like the rest, and for which you can certainly get two hundred francs. Why did you not carry them away with your forks and spoons?”

It is a tremendous display of grace, and the bishop later tells the criminal Valjean that he has bought his soul for God – use this incident to go and become an honest man.  He does indeed, and we witness the power of grace to transform (see Titus 3:7, 8).

Now what I didn’t know (because I hadn’t read the novel and the nosebleed seats were no help) is that the power of grace is all throughout the story, and most wonderfully set against the harsh taskmaster known as law. In short, I don’t know if I’ve seen a more “Christian” movie in years.

I wonder if Sacha Baron Cohen realized it.

Posted by Roger Knowlton on January 1, 2013 in Uncategorized