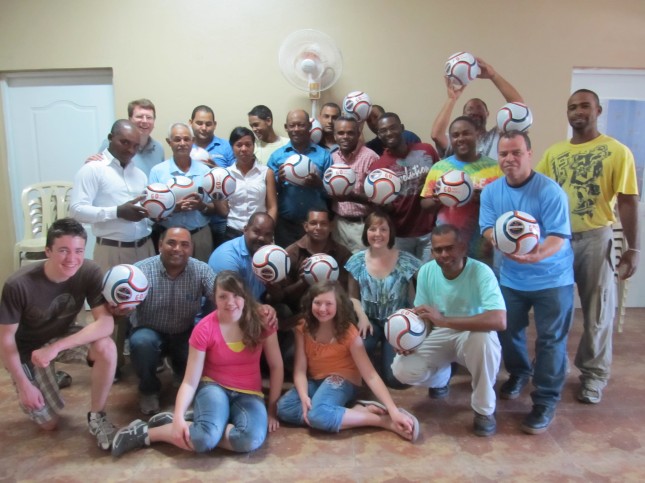 We passed out mission balls as gifts to the pastors. Moises, our translator, is on the far right in the blue shirt standing up.

Just call us the professors, Rog and Jamie.

On Thursday and Friday at the Central church here in Santiago, Jamie and I got to pretend to be experts as we spoke to Dominican Pastors on the wide-ranging subject of ministry.  Jamie taught on youth ministry Thursday morn (while I went to La Mosca with my fam).  I taught them on Thursday afternoon and all day Friday (while Jamie ministered with the Knowltons).  I think we would both agree – it was very rewarding.  I’ll give you my account:

First there was my translator Moises (Moses in the Spanish Bible). What a delightful guy – ready and raring to serve the Lord. He spoke fluent English because he had spent 30 years of his life in New Jersey, his parents having emigrated to the U.S. when he was 5.  Though he had his green card, through a series of circumstances, he was deported and sent to the Dominican Republic.  Imagine all of your life and memories in the U.S. and then being sent to a country like the D.R. at age 35.  But God is good: Moises came to Christ and began serving the Lord through G.O. Ministries.

Teaching through a translator takes some getting used to, and it helps to have an expert like Moises.  Once he even finished my sentence. I said half of what I wanted to get out, and I could tell by his inflection that he said what I said and what I was going to say.

I turned to him, “Did you just finish my thought?”

“Yeah…I knew what you were going to say.”

Maybe you should call me predictable Professor Rog.

It was a great class and the guys were eager to learn.  We covered preaching and shepherding. We talked about the pastor’s most important responsibility: staying close to the Lord personally in the Word and prayer (“Abide in me and bear much fruit…apart from Me you can do NOTHING”).  We talked about all the toughies: ministering to the divorced, sexual sin, etc. It’s amazing how similar ministry in the Dominican is to ministry in Wisconsin.  People are just people.

Unlike the others, one guy would stand up every time he wanted to ask a question.  He would always start very seriously, but as he would be finishing his query, the guys around the room would start laughing. Of course, I would be scratching my head until Moises could translate his little comedy shtick – a regular pastoral Jay Leno.  I started calling him the comedian.

More than anything though, I think the men most appreciated the part of my class that was new from the last time I had taught in Belarus.  I spoke with them about how the gospel was not just for non-Christians, but for Christians also.  I showed them how Paul was eager to preach the gospel to the Christians in Rome (Romans 1).  I told them Paul urged Titus to preach the gospel to his church in Crete, so that his congregation would devote themselves to good works (Titus 3).  Oh, how we as Christians need to be daily reminded of the love of Christ displayed at Calvary for us, so that we will be moved afresh by Christ’s love every day, and devote ourselves anew to serving Him.

For the love of Christ controls us, because we have concluded this: that one has died for all, therefore all have died; and he died for all, that those who live might no longer live for themselves but for him who for their sake died and was raised.

Posted by Roger Knowlton on May 27, 2012 in Uncategorized

Thursday was a gorgeous, sunny day, and after breakfast on the refreshingly windy third floor terrace where we take our meals, we made the 20 minute trip through Santiago to “La Mosca,” translated, the Fly, where we ministered to about 60 – 70 kids at the G.O. Ministries nutrition center.  La Mosca is a gathering of (1,000? 5,000?) squatters who have made their homes next a great mountain of garbage (I will add pictures soon).

All in all, it was a sight of sadness. Scrawny, emaciated dogs were everywhere.  Purposeless human beings leaned against posts and sat on “porches.”  Upon arrival at the nutrition center, John warned us about the significant dangers of disease (after we touched anything, including the people, we were always to keep our hands away from our faces) and then, as we got out of the van, five to 10 little urchins surrounded him and began hanging on him like metal shards to a magnet.  When John disappeared to set up our visit, I became the magnet.  Apparently these kids didn’t care who was loving them – they just wanted a friend to play.

Josh (and Elisabeth as the arms) is the wee little man

Our ministry seemed to go very well.  The little VBS that the Knowlton family set up went well, complete with a skit and a nice little craft that we spent hours preparing for what we think will be a total of 300 kids (more kids’ ministry in other locales was to come)  – Sycamore trees out of paper bags.  We helped the La Mosca kids with their crafts, served lunch, had a conversation in broken English/Spanish with a couple of teenagers, and then wandered over about 50 yards for a greater view of the garbage.

A river of sludge from the festering trash ran next to the mountain of refuse.  Beautiful little girls played nearby on steps made of used tires.  One man wandered through the mountain looking for treasure, often shards of metal that can be traded for cash which will bring meager sustenance.  One “home” seemed especially close, and a couple was sitting in the back.  The woman asked John why he hadn’t brought them something, a completed craft, I suppose, and he said when he had tried to invite them and their kids to the gathering, they were outdoors engaged in… do you want to guess?

Would you call this love in La Mosca?  I hesitate to do so.  Sex maybe, but I would cast serious doubt on love.  There are many children in this place, but also many single mothers.  Men use these women and leave them, cruelly treating them just like the mountain of refuse where they make their homes.

Posted by Roger Knowlton on May 25, 2012 in Uncategorized