Part 1 of my tale of preaching chapel at Waupun Correctional Institution is here and part 2 is here.

I would guess the Walls chapel has a capacity of 200, but for crowd control, only 80 “offenders” – as their nametags declare them to be – are allowed in. Chaplain Francis brought me a jug of water, and we went over the uncomplicated “order of service”: three songs and then me.  And the service started.

Prison chapel worship was led by a choir of 8 men.  There was also a guy on keyboard, a lead guitarist and a drummer.  The music elevated me.  Now, I can’t remember the name or the melody of the first song, but I remember the chorus: one word…Jesus.  All the songs were slow and swinging, smooth jazz like, and nothing like what I’m accustomed to in the worship that I’m regularly exposed to.  A couple of years ago, I baptized about 15 prisoners, testimonies and everything, and the prison choir showed up to sing us through.  Oh, happy day…

The second song we sang on Saturday was Kirk Franklin’s “Silver and Gold.”  A great song, but what I remember most was the solo that one man sang:

Woke up this morning, feelin’ kinda down,

Then I called my best friend; he could not be found.

Then I called Jesus…

He sang this particular part at two different places in the song, but I could never get the next line, because when he said, “Jesus,” the place erupted…both times.  Suffice it to say that the overall sense was joy, O so good.

We closed up with Curtis Mayfield’s “People Get Ready, There’s a Train a Comin’.”

I’ve got baggage, so to speak, but I love that I don’t need a ticket. Thank you, Lord.

Then it was time to preach, which went fine, if I can say so.  Preaching at the prison chapel, of course, is different than preaching at Edgewood because…well, let’s just say that there is a lot of audience participation. You might call it a team sport. Can I get an Amen?  Every so often when I’m preaching at Edgewood, we get a visitor or someone who will say “Amen” as I preach.  It’s okay, of course, as long as they “Amen” with the right timing.  Not just anyone can “Amen,” you know; there is a rhythm to it.  And if you’re gonna help the preacher, you got to do it right.  The timing was ON Saturday afternoon, and the men helped me preach the same message I delivered to our church at Easter – the parable of the man who was forgiven much but who himself refused to forgive: The Lesson: Forgiveness always involves suffering. Hence, the cross. When I understand how Jesus has suffered for me, I am naturally willing to suffer to forgive the debts of others.

Afterwards I got to the back and shook a number of hands. The men “glorified the worm” and then headed back to their cells. And then it was time for Chaplain Francis to walk me out through the many doors and bars…to freedom.  I dropped by to see my family serving at a Piggly Wiggly brat fry, and headed back to my office a mile or so away.  I had to finish a sermon for a whole different set of folks who would be coming to Edgewood at 5:30 that night.

My brief afternoon with the inmates of Waupun Correctional Institution was over.  We only spent an hour in one another’s company, but I’m hoping that, at least with many of these men, one day…we will spend eternity together.

Posted by Roger Knowlton on June 9, 2016 in Uncategorized

One Glorious Hour in Maximum Security 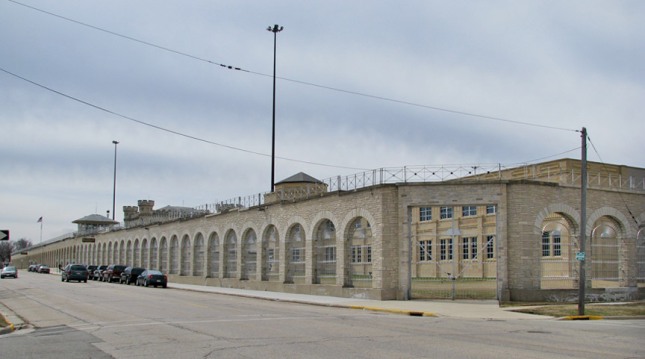 Waupun Correctional Institution, affectionately known around town as “The Walls”.

I went to prison on Saturday, but thankfully, only for an hour or so.

Waupun, population ~12,000, is home to not one, not two, but three prisons – two maximum security and one minimum. I’ve been leading a Bible Study at the maximum security Waupun Correctional Institution for about 7 years. It’s an architecturally beautiful structure right in the center of town. I’m there on the second and fourth Thursdays from 12:30 to 2. No real prep is required for these studies: usually I just take a recent sermon I’ve preached at church and half preach it, half discuss it with the guys who come.

But this past Saturday I went to the Walls to preach at the Saturday chapel. I had done it once before, but Saturday is not the best day for me. It’s usually the day I’m writing out my sermon (I manuscript it, about 95% word for word) so sometimes I think of it like a 12 – 14 page term paper every week. Saturday is always a crunch day for me, so taking 2 hours in the middle of the day can be a little scary. This past Saturday, at the day’s halfway mark, I was at a nice place in my preparation, and I headed off to preach in a good mood.

Shortly after noon, I got to the front gate, and was met by Todd, the correctional officer who oversees the chapel most days when I come. He’s a gregarious guy, friendly, seems to enjoy his work, and though he’s usually not at the front gate, everything is different on weekends. Someone had to be there to escort me in – what the correctional officers affectionately call a “ride,” and Todd was the guy to do the job.  Todd says he’s going to visit our church…and read my blog.  You out there, Todd?

My first few times visiting the prison years back were intimidating. I thought once to count the number of gates and metal doors I had to pass through to get in. Suffice it to say, there were a lot. I don’t know if claustrophobia comes from being in locked places that are not easily exited, but if so, I can see how someone with such a malady would have a very difficult time in the Walls. Todd and I walked through the many accesses until we reached the large inner courtyard. Usually the place is a beehive of activity, prisoners and guards walking about, but on Saturday, it felt like a ghost town.

We proceeded to the chapel building, where I met one of the two prison chaplains at the Walls, Chaplain Francis, a man who has become a friend through the years. He’s a catholic from India, and returns home for a month-long visit almost every year. He greeted me downstairs in his office, and then I went to a medium sized room where I looked over my sermon for 10 minutes or so. Around 12:30 p.m., he escorted me upstairs to the large chapel…

Posted by Roger Knowlton on June 7, 2016 in Uncategorized