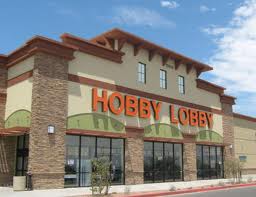 A month or two ago I wrote to David Green of Hobby Lobby. It was a Hail Mary pass, to be sure, but I had read this article about his generous contributions to Christian causes, and in light of our church’s capital campaign, “So All May Know,” it seemed reasonable to give it a try. He had helped many others. Why not ask him to consider helping our church? In my letter, I told the same story about my father that I told in our many meetings, passing on our vision to reach a lost world.

But now it seems Mr. Green and his family-owned company will not be helping as many in days to come, and if the Federal Government has anything to do with it, they may never help anyone again.

If you don’t know the story, Denny Burk sums it up well here. This is an excerpt:

I am astonished that more Americans aren’t in an uproar about what is happening to Hobby Lobby right now. As many of you know, Hobby Lobby filed a lawsuit earlier this year to try and get relief from Obamacare’s abortion mandate. The case is still pending appeal, but the Supreme Court just rejected their request for an emergency injunction. In response, the Christian owners of Hobby Lobby have said they have no intention to pay for the abortion-inducing drugs required by Obamacare. That means that beginning on January 1, the United States government will fine Hobby Lobby $1.3 million dollars per day until Hobby Lobby complies.

This is the most egregious violation of religious liberty that I have ever seen. The United States Government is forcing these Christian business owners to pay for abortion inducing drugs in their employees’ insurance plans. It doesn’t matter that the law violates their religious liberty to conduct business in a way that is consistent with their conscience. Obamacare mandates that these Christians comply or face fines that will put them out of business.

1.3 million dollars a day.  A lot of churches could be helped with that money.  A lot of Kingdom causes could be advanced.  But until the government relents, it looks like Hobby Lobby will be helping far fewer people, while holding to God’s standard of life.

The first line of the Bill of Rights says this: “Congress shall make no law respecting an establishment of religion, or prohibiting the free exercise thereof.” Obamacare prohibits the free exercise of the owners of Hobby Lobby. Who’s next?

Posted by Roger Knowlton on January 2, 2013 in Uncategorized

2 responses to “Hobby Lobby in Trouble”